In late November we were back at one of our favorite places, the north coast of California.We drive thru Petaluma, CA and out to the coast on the Bodega Bay Highway until we connected with Highway 1.  After going north, we reached a beautiful spot where the Russian River meets the Pacific Ocean at Jenner, CA. The beach changes with the seasons and is not always open to the river.

Russian River pouring out, Goat Rock in the background

Looking north from the river

During this trip while doing some work on our cabin, I had the opportunity to join some wonderful ladies that have an unusual hobby. Particularly considering that most of the group is past retirement age!

Below, the view from the back of the visitors center looking at Gerstle Cove which is a Marine Reserve.

Looking out at the cove

Looking down on the path to Gerstle Cove

The women try to get together weekly to put on their wetsuits. Grab their fins and masks and hike down to the Salt Point State Park Gerstle Cove shore.  From there they swim out into the cove, snorkel, ‘bob’ around and spend an enjoyable time checking out the seals, fish and underwater views in this protected cove.  After their ‘bobbing’ the ‘Bobettes’ as they call themselves, hike up to the top of the hill to dry off, and have a cup of hot tea and snacks before heading off for their workday in the local area.  I find it quite amazing that they do this almost weekly all year.  They have no concerns that no one is on shore waiting for them to check if they are safe.  They say that they can all take care of themselves and each other.  How brave and empowering! Of course, they say, ‘it’s no big deal’. 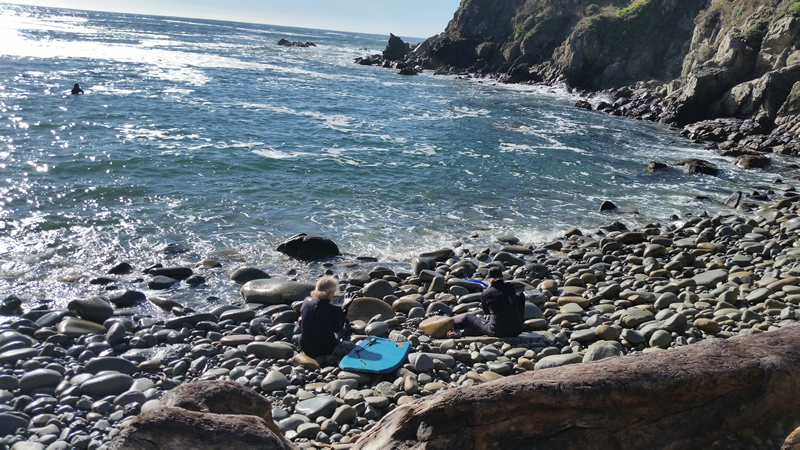 Final steps before heading out, note that one woman is already past the surf line

Paddling out into the cove 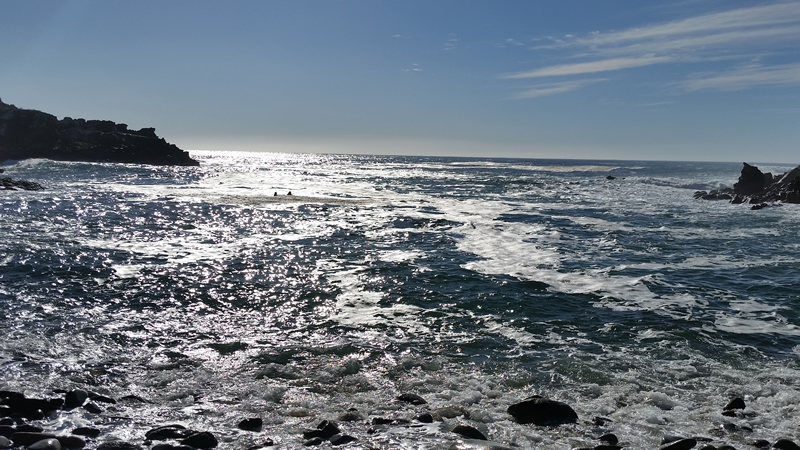 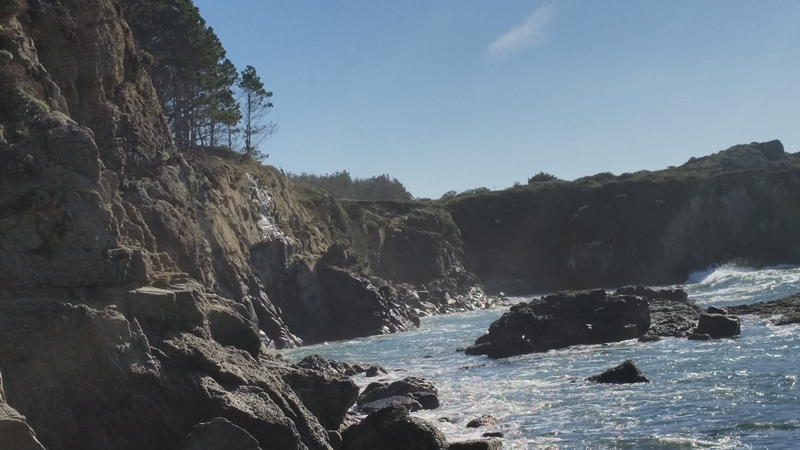 The cove down at the water line

Looking from the cove up to the Visitors Center

The Salt Point State Park area is quite large with various sections.  It includes two campgrounds, various small parking areas off Highway 1 and some lovely trails both along the shore and in the dense Redwood, Pine and Douglas Fir forest areas.

At the North end of Salt Point Park, the Kruse Rhododendron Trail is great anytime, but probably most lovely in May when the wild Rhododendrons and wild Azaleas are in bloom.  The short loop trail has lots to see.  If you have more time, there are also longer trails nearby.  During the raining season many types of mushrooms grow, some of which are deadly if eaten. 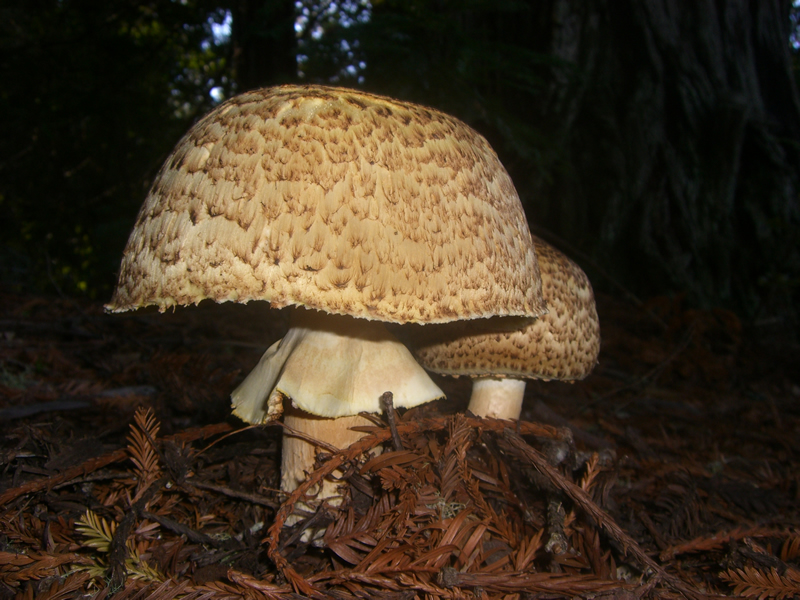 Large mushrooms, some are up to 5 inches across

At Stump Beach, there is a parking lot, picnic tables and trails.  Our favorite trail is down to Stump Beach itself.  This is not an area to access the ocean but it is a beautiful place to look at the ocean.  Stump Beach has tremendous waves that can sneak onto the beautiful beach and quickly sweep you out to sea.  This is not a place to turn your back on the ocean! 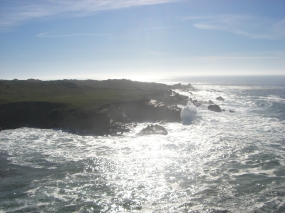 From the beach is an easy trail to climb to the bluffs along the ocean.  In the spring this trail is filled with wild flowers.  In the fall and winter, it is filled with breathtaking ocean views of crashing waves. The last time we took this trail we were lucky enough to see a sea otter hauled out on the rocks below the bluffs. The trail can be followed back to the main parking areas at Salt Point State Park and down to Gerstle Cove which is often a great place to enter the ocean. 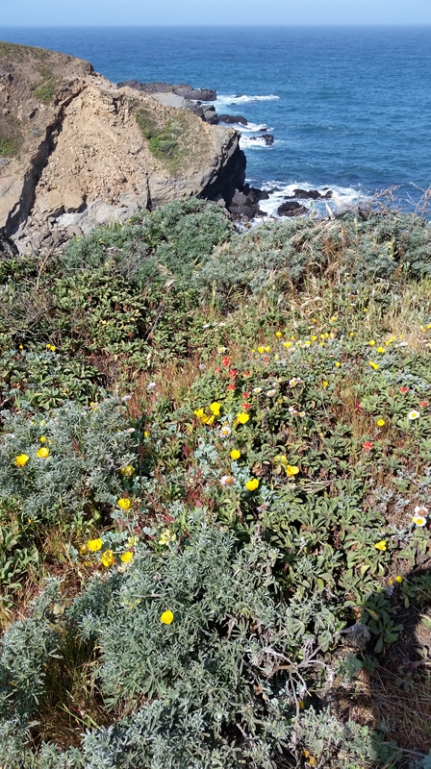 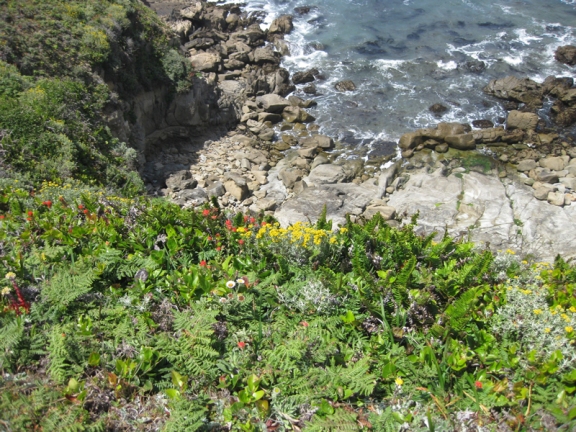 Looking down on the rough, rocky shore

Back at the outer edge of Gerstle Cove

It’s nice to think about these nice hikes and sunny days as I sit today watching another snow storm in Truckee.  This has been quite a winter. More snow in January 2017 than the average snowfall for a full season.  Unfortunately, we have not had an average snow season for over 5 years.  We have snow piled everywhere and they say to expect 1 foot to 3 feet more snow before the end of this weekend!  At least, for now, California is no longer in drought conditions. Yeah!  However, due to global climate change they say that we can expect more extreme weather patterns with long periods of drought followed by storms with erratic yearly patterns.  It has been over 10 years since we have had anything close to this much snow around the house.

Digging our our friends car, late January 2017. Notice how high the snow is piled around the driveway! Still that high!

Until the next time – be adventurous and enjoy this short life! Vicki and Bob

Please add your email to ‘Follow this Blog‘ for updates.  We never share your email.
Interested in a vacation in Hawaii?  Check out our friends units at SurfCondo.com