Traveled from San Francisco to Atlanta to Lima.  Arrived around 11:30 pm  on April 15th. We took a morning city tour on the 16th.  Started at Larco Museum. Beautiful gardens, amazing pre-Columbian art and pottery collection going back 4,000 years.  It is housed in an 18th century vice-royal building which was built over an ancient pyramid! 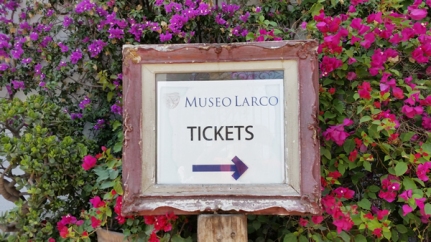 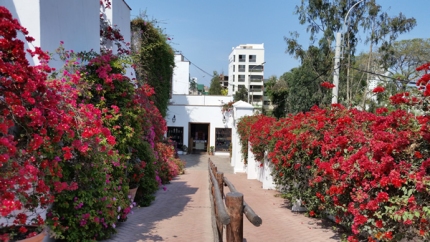 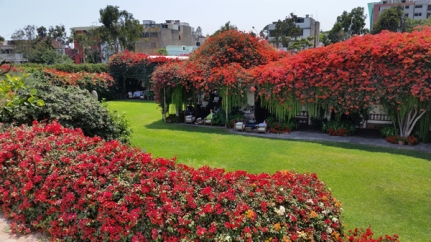 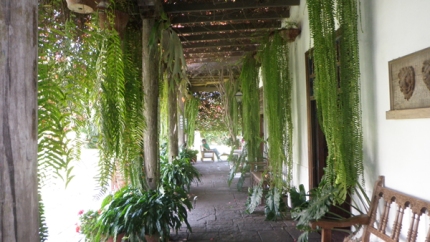 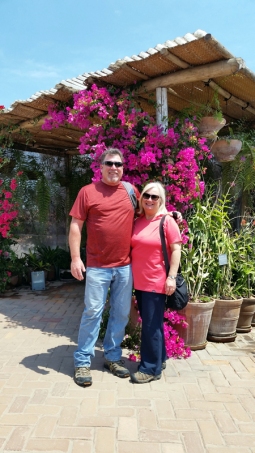 Outside the garden store 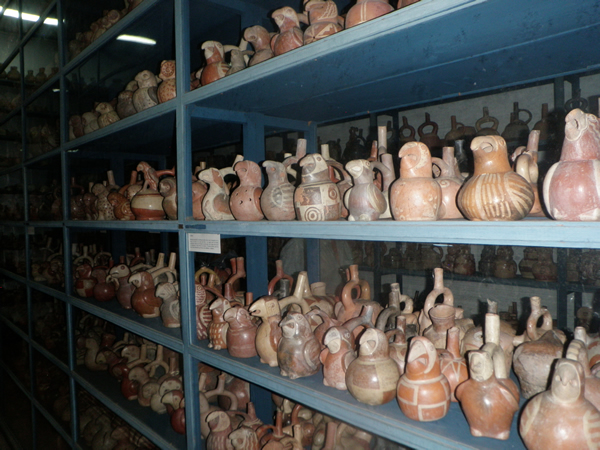 One of many pottery rooms

Additionally, the Larco Museo houses many masterpieces such as the Chimu Gold Attire. 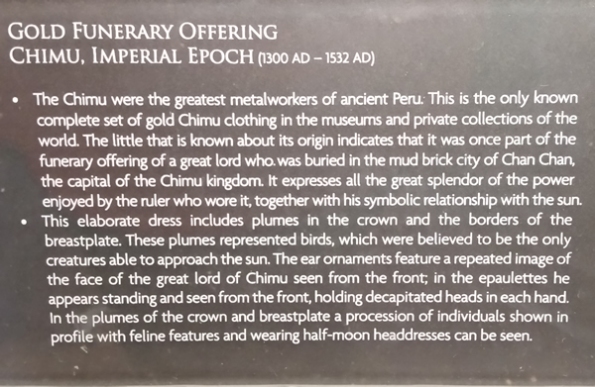 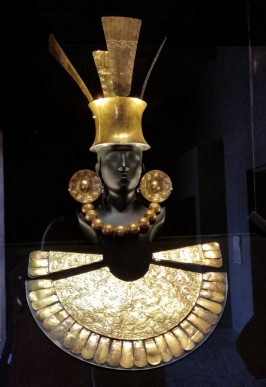 If we were to go to Lima again, we would visit the museum in the morning, plan lunch and then go back to Mira Flores area for the afternoon and evening.  Then visit the old city sites the next morning. Lima is a huge, sprawling city.  Traffic is bad, use tours if possible or drivers.

Visited Lima’s old city center.  Plaza Martin with a horse statue that gives homage to Peru‘s liberator, José de San Martín. and a beautiful garden.  Nearby is the Simon Bolivar Hotel and some beautiful architecture. 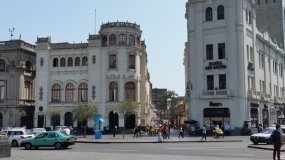 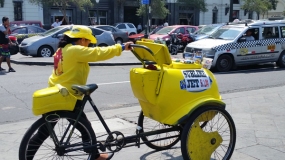 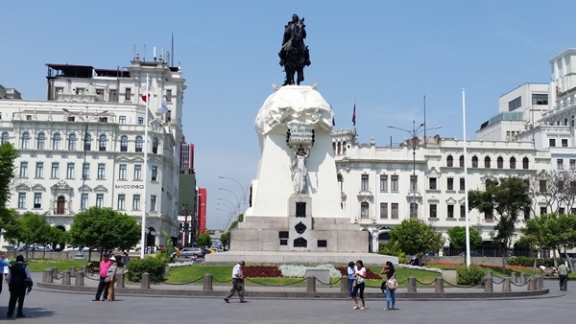 Plaza Mayor had beautiful yellow buildings with wooden balconies, the president’s palace, the Lima Cathedral and Spanish estates. We were not able to go into any of the buildings except the Cathedral, but the architecture was spectacular! 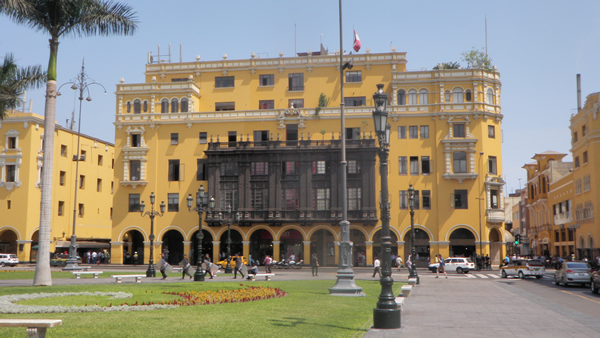 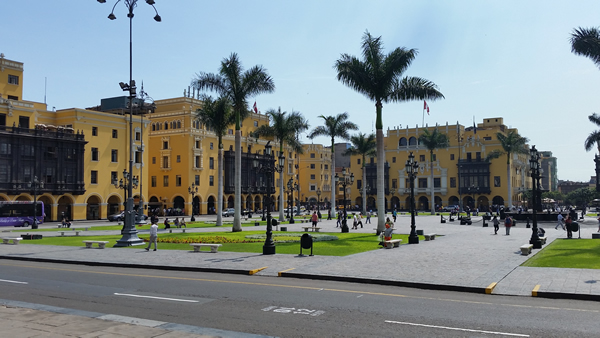 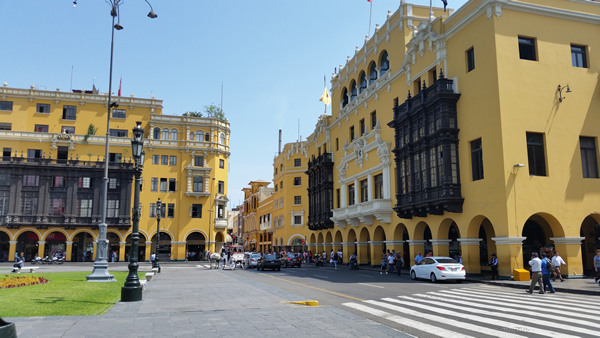 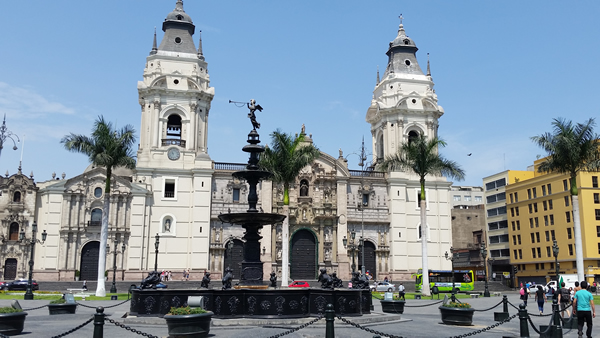 In all the Cathedrals and in the religious paintings Christ, Saints and the Virgin Mary are done with cloaks or drapes to make a pyramid or mountain shape.  This was done because the Inca culture viewed mountains as Gods and the Spanish felt that by using the mountain shape they would have an easier time converting the indigenous population to Catholicism. The Inca’s believed in three levels of deities: below ground, the serpent; on ground, mountains and jaguars; above ground, sun and condors.  The Spanish worked these beliefs into their religious lectures with hell, this life and heaven. Church statues are done in mountain or pyramid shape to follow the Inca idea of mountains as gods.  Very interesting! 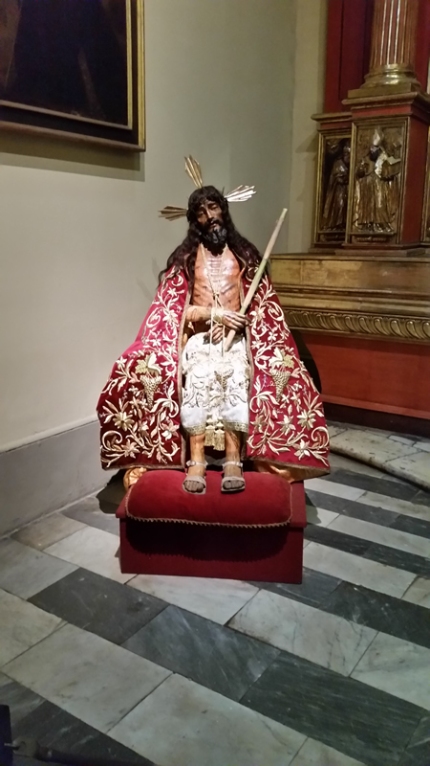 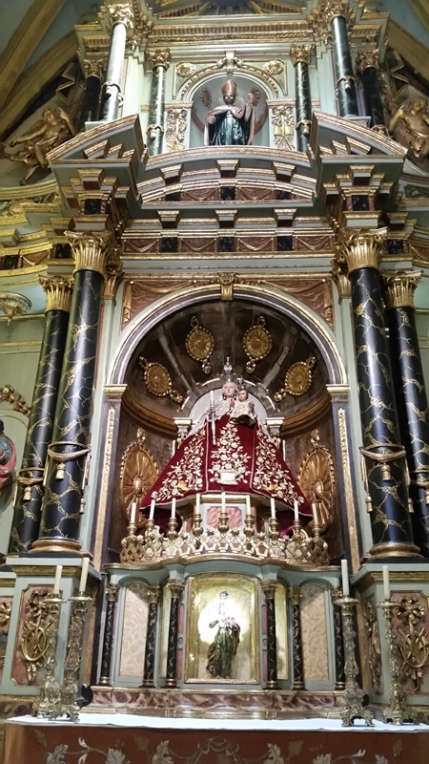 Visited the San Francisco Monastery, a cathedral & a museum in the monastery. It is the only cathedral in Lima done in the Moorish style of white and red with blue mosaic tiles. also visited the catacombs which were huge and quite amazing.  Very daunting to think of an earthquake while you are visiting the catacombs. Beautiful, but no pictures allowed inside.  The tiles were beautiful and the library filled with antiquities was spectacularly beautiful. 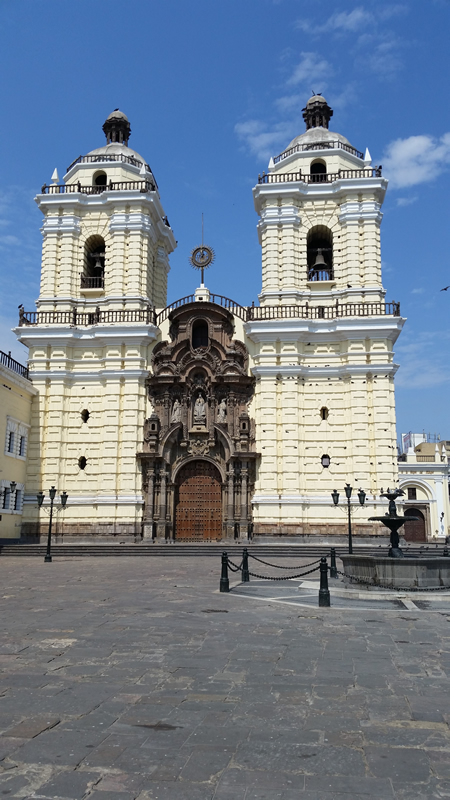 In the Mira Flores area is Huaca Pucllana which is a solid adobe pyramid.  The area encompasses several blocks.  It is believed that in 400 AD the complex was a ceremonial and administrative center.  The pyramid was created as a symbol of status and power – only the most important people were buried at the top, and from there the ruling priests could look down upon their subjects. Excavation is ongoing and tours are available, we just viewed the area from the street.  Very impressive! 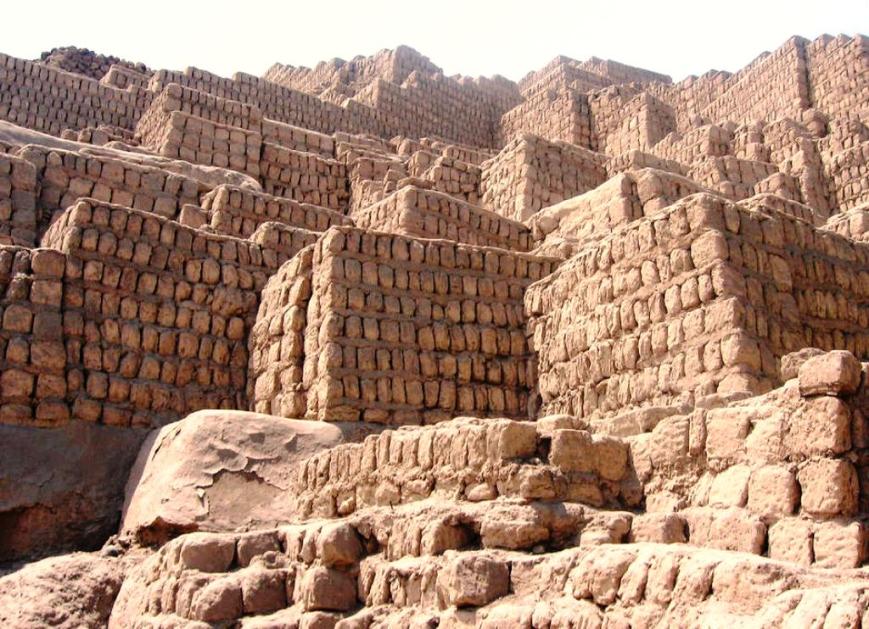 Finished up our tour in the new, modern Mira Flores area.  Visited Lover’s Park with the mosaic work reminiscent of Barcelona, Spain. 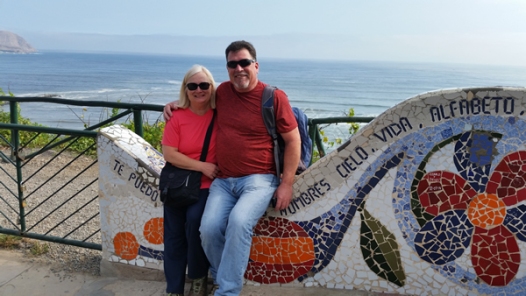 This is the area where we stayed and it was a great location for restaurants and shopping. Ended our day with an amazing dinner at Panchita Restaurant in Mira Flores with a fantastic waiter and great food! 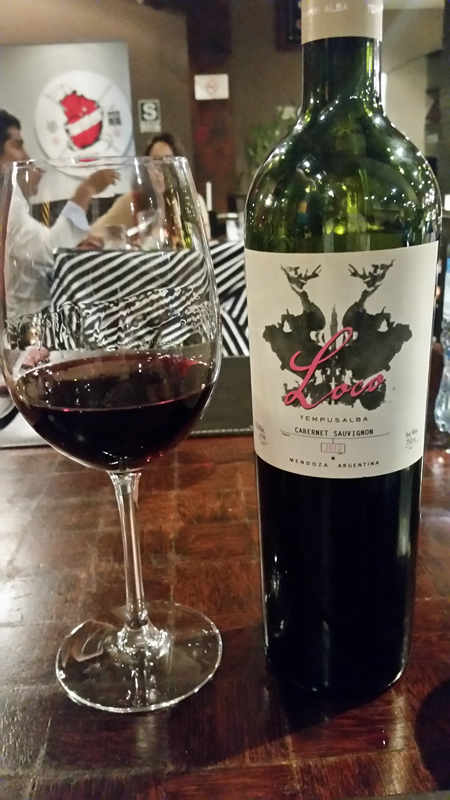 Next to Cusco (Cuzco) and the Sarced Valley of the Inca’s.

6 thoughts on “Peru and Galapagos Trip-1”