As I said the paperwork started in February.  By mid May the final plans were submitted to the Town of Truckee for permits.  To our dismay, they said it would be at least 3 weeks before the earliest approval.  With the July 4th holiday looming our start date of June 22 was not looking good.  Along with Truckee we had to have site plans and all exterior changes approved by the Tahoe Donner Homeowners association before any construction or exterior work could start.  Luckily we could start the Tahoe Donner process concurrently.  We had two meetings with them in June and met all their requirements and were just waiting for the final Truckee approval.  Truckee came back before July 4th and asked for some minor changes.  We worked with the Engineer to have the plans modified and quickly re-submitted.  Luckily the revised plans were approved on Friday, July 5th late in the day and the day after a holiday.  We were quite impressed with that response!  July 10th was the final approval meeting for Tahoe Donner and with approved plans and permits in hand; they also approved the project.  The official start date was July 11th.  Well, if you know Bob, he was counting on that approval and had already scheduled the tree cutter for 8 am on July 11th. and work began.

Below are the three (3) large trees which were very close to the house and had to be taken down for the new garage/workshop addition.

A local tree cutting contractor came with his crew, chain saws, large truck with shredder and they went to work. Juan Estrada of Mountain Tree Services mountainje@hotmail.com and his crew were amazing!  I was in the SF Bay Area that morning but Bob described how Juan carefully climbed each tree with ropes and climbing gear.  He then proceeded to limb the entire tree, then he went back to the top and started carefully roping off and chain sawing sections which were each lowered down to his crew.  It was like an choreographed dance.  Each huge section carefully dropped so nothing touched either our house or the neighbors house which were both so close.  Each tree section was cut into a 16 inch round which was moved to the back of the house for Bob & I to split on Saturday.  They left the trees with about 5 feet still standing so that the excavating crew could pull the entire stumps out as the stumps would be too close to the addition to leave in the ground. They did a wonderful job and cleaned up everything.  For the big tree by the deck, it was cut close to the ground and the stump will be ‘ground out’ later.  If that stump was pulled out; our driveway would also be pulled out!

Saturday, July 13th Bob rented a wood splitter and we split all but 25 of the largest rounds.  It took all day and of course, it was part of the heat wave time!  During the next week Bob stacked the wood and estimated that we have 3 1/2 cords stacked!

Bob with the stacked wood, there are 3 rows!  Hopefully, enough pine for 3 winters.  We still need to rent a vertical splitter for the large rounds. 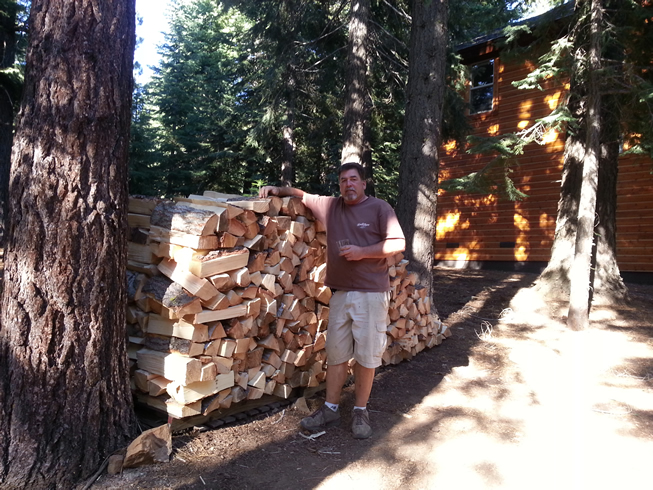 Can you tell, he looks a little tired?  More happened during those few days but that is another post.  We had a wonderful dinner Saturday night at Las Panchitas in Kings Beach, CA